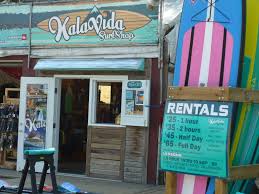 Prior to ending up at Kalavida Surf Shop , my Jedi mentor and I had been dodging a thunderstorm for the better part of the morning. In fact, a horn was actually heard by some other foursomes on the golf course we were playing on. Oddly enough, our group and the foursome behind us, which included the club pro, seemed to have been deaf to that urgent sound. So instead of worrying about my ancient lightening rod clubs, I started to breath in and out and found a comfortable place on the course. My mentor, whose nickname is “Mad Dog”, kept reminding me about this notion he called “the neutral position”. When I was younger, I did have to discover neutral position while clinging onto the hillsides of San Francisco. My step Dad, who had a knack for automobiles, had managed to squeeze a Fiat Spyder engine into our little FIAT station wagon. The neutral position was an elusive sweat spot found in a four-speed gearbox which had not come along with the engine. So my original quest to find “neutral” was achieved when my father grinned at me as I wiped my sweaty hands on my Levis. I discovered that no matter how short the moment, the actual action of finding and than going through neutral was a path that provided both calm and satisfaction. It was both peaceful and transient. So while the electrons danced a merry rumba in nimbus clouds about, I was about to discover that my own notion of “neutral” was mechanically related to both golf and paddle boarding. Yet what really put a tingle in my toes was that “the neutral position” serendipitously stokes a life journey of pursuing freedom and Flow.

As the story goes, in my life I have weathered a few storms, so having a few dark clouds on the horizon or above me does not faze me. In fact, the slight tingle in the back of my neck when I arched my metal clubs skyward was rather inspiring. Besides readopting a rather non-fatalistic perception of life, I was rediscovering what it was like to have balance in both legs with each successful swing. Now I must confess that I am not a golfer. I do explore the links from time to time if only for the social component. I enjoy the positive advice from my partners like “ah young jedi, take the wise path and avoid hitting the tree”. Yet as the clouds rumbled above, a continued affect of my last six-month metamorphosis was putting a grin upon my face. Even as I was told of “ball eating trees” and “railcars going to Vancouver”, I found a simple a smooth sense of flow beginning to evolve. As my mentor continued to grin and compliment my successful shots, my body continued to feel both the arc of my swing. I rejoiced at the thunderclaps from the clouds above. Throwing caution and my soaring wee white ball to the winds, the universe smiled back and gave me applause.

After the game and heading towards Kalamanka Lake, “Mad Dog” and I had an animated conversation about this whole notion of neutral. Look neutral up on Google and the first thing you discover is a discussion on path to ground and the possible electrocution that I avoided . Go down the rabbit hole and you will find no end of references to the definition of neutral. It can be an emotional impasse or a country avoiding to get embroiled in an activity that may involve weapons. Put it to use on the water and the term can be used to refer to positive and negative buoyancy. Even in chemistry, when the Hydrogen is in equal concentration with hydroxides, there is a neutral point. Finally, where would any biologist be without discussing the homeostatic properties of water and the amazing ways that life maintains a natural and neutral balance of water and electrolytes!

Prior to our game of golf, my Jedi warrior friend and I had already paddled the night before. I was getting ready for my pumping Clarity warm up went a blond surferesque kid came with a pump. “Dude, the owner said you might need this”. It was this simple act of awareness that gained my alliance to the Kalavista Board shop. Not only did I want to thank the owner of the shop, I also wanted to explore a place that has been referred to as the first SUP board shop in BC. My mentor already knew about the owner and simply called him “Kevin”. It seems that Kevin Obrien of Kala is a bit of legend in the board community. As I was later told, if you want a guy who questions normal and has been used as an example of…not being normal, he is your guy.

Now I have always questioned “normal” and being another word that begins with “n”, I figured a visit could enhance my understanding of “neutral”. There, next to the railway tracks, I was suddenly reminded of another peaceful pit stop called Healdsburg in Sonoma Valley. As I turned to look at this surf shop, a few neurons went bing and yup..this place could easily fit in with its compatriots on North shore. The place was simple and yet unique. There was simple designed logo and a huge parking lot. We had just stepped into the shop when the clouds unloaded a much-needed load of rain. It was just like sneaking out of squalls on any tropical island. I was busy looking at stock, like bracelets made of parachute cord, when the store became a safe haven and a story room for Kevin to show me his video of river paddling in the interior. As he said, “we wanted to do something before standup paddling became popular and trendy”. So as the surf music blasted, the showers dampened the parking lot and Kevin grinned, I watch a crew of what could easily be Ken Kesey’s merry pranksters, set off to paddle in tutus  and Viking horns. Yes, there were rocks and a distinct lack of concern for them. Yet if you refocused your perceptions, one could easily see a sense of merriment that you only get when you sneak through neutral and kick it into a new gear.

I was lucky enough to grab Kevin’s attention for a few more minutes, like me, he is easily distracted. We talked about gear as he pulled out an amazing fin from a secret spot just above the cash register. Having been referred to as “young Jedi” all through the morning, I held the fin in my hands and felt the force. Did it actually glow in my hands? Could this be the magic fin that would keep both me and Clarity on course? Yet I knew Kevin was inspiring a more subtle direction. The rain soon stopped, the crowd in the store increased and Kevin was now busy finding a new soundtrack to play and talking about the merits of a powerful pump. Yes, I almost thought of buying one! Yet as quickly as the weather changed, the topic of our conversation diverged into talking about surf paddling and boards I should consider. I was grinning ear to ear and simply rocking from foot to foot, feeling this new thing called “neutral”. As the rain began to lighten up, an ecstatic young woman purchased her first board. Like her, I could relate to her massive smile.  I had the same goof ball look when I bought Clarity only a few months ago. True to his own sense of fun and tradition, Kevin told her to grab a free t-shirt. I smiled and soaked in the moment; this was truly a place where SUP Boarding was more than a trend, it was a distinct culture.

Spending time on a paddle board at Kalavida

Kalavida goes for a river trip

After another day of practice, in which I learned to actually effectively chip and pitch, my mentor rewarded me by taking on a social river tubing trip took me down a lovely patch of water some where near Lumbly . All the while, I was feeling my left side of my body awaken from more ten years of pain and imbalance. I enjoyed the happy banter of the company on this slow and mindful float down the river. While my mentor did the wise wizard or lazy lizard thing, apparently snoozing in his chair, he later reminded me that I did not need to be a continual goof. He stoically reminded me that though I was blessed with a good sense of humour, I did not need to use it continually as a defense mechanism. While “Mad Dog” artfully avoided margarita jug pours, he watched me as a mindful Jedi. I was lucky, truly lucky, to be feeling this much alive on such a sun filled day. I wondered if Jedi’s took time off to find neutral. Was there a place where a Jedi could chill besides a noisy extraterrestrial  bar?

For me, what the neutral position has now become is a possible replacement for the notion of balance. Perhaps neutral is that position where the working mind operates with out the  thinking mind taking part. For example, yesterday I was back on Clarity after a five-hour drive when I noticed a positively buoyant paddler from Brazil, wobbling her board from side to side by swaying her hips. I followed suit and in a quirkish solca action, both feet happily let my board arc from side to side. I was stable if only because I was not thinking about being unstable, What was odd was that this motion was just like doing a golf swing! My body, now fit, was starting to recall body memory and the joy of having the sense to go in and out of balance! I raised a heel and then a toe, pushed downward and just as I felt the board lean to the other side, that faithful clutch foot came into gear. I was discovering neutral all over again! So today, I found a hidden trail along False Creek and hide from the sun. There was a happy hop in my footsteps as I remembered Kevin Obrien’s words of wisdom..”leave some room for spontaneity and magic and it will happen”. Perhaps “it” is just that smooth shifting of gears between an all too demanding thinking mind and a smooth flowing working mind. Along that path, you have to remind your self to go through neutral.